What does it mean to introduce a new product? Is that the same as “Releasing” a new product? It depends upon who you talk to, but certainly from the CM point of view, they are the same. The process gets the product out of the mind of the product creator, through some phases of development, through some phases of manufacture and into customer’s hands. Hopefully without the “throw it over the wall” syndrome often involved.

Yes, a gap or wall often develops between Design Engineering and the rest of the company and bridging that gap or tearing down that wall is the most important task of a Configuration Management (CM) function. CM also tends to be whatever the management wants it to be. Management should want CM to start with the new product release process – the process that a product manufacturing enterprise follows in the release of new products and their documentation.

The use of cross functional teams is typically touted as the most important aspect of fast and successful new product introduction. These teams are, of course very important. In very small/start up companies or in “garage shop” development environments the team approach tend to happen naturally. All the functions represented in the garage are constantly communicating about the process that is and will be followed. But as the operation grows, difficulties set in. New people with a variety of backgrounds and experiences enter the picture. Even the meaning put on key words tends to be different. What a pre-production unit is to one, is a pilot unit to another, is a prototype to another. When a meeting develops into disagreement or disarray and the cause isn’t apparent, the problem may be simply that words and terms have not been carefully defined nor the corresponding elements of the process.

Take a poll among key people in several departments and ask; “How many phases are there in our new product release process and what do you call them? The results are eye opening! Ask; “How do you know when you have progressed from one phase to the next? Do you get questioning looks? Also ask; “How can I tell by looking at a drawing or the data base(s) and tell which phase a part number is approved for?” Has your company ended up with a quarter million dollars of useless parts in stock or on the dock because someone made/bought parts for production from a drawing that wasn’t ready for production? These are symptoms of a problem – confusion in the release process. Cross functional teams can help, but they need to know what the operations normal process expectation is.

First step is to determine the number of phases normally required on a new product development and what the enterprise will call them. Some possible phases (in the writer’s terminology since there is no industry standard) are:

Although five phases are listed, this is not to imply that they should all be used in any given enterprise. Some operations might require two and some seven. A make to print company would have different phases than an aerospace company on a DOD contract. This decision must be carefully analyzed in order to arrive at the fewest phases necessary for the operation. Engineering or Manufacturing or others may have sub-phases in their operations but the company wide phase plan is most important to define. A different set of phases might be required for “spin-off” products as opposed to “new” product. Remember, we are seeking the normal expectation. Your release policy should state how exceptions can be taken. Example: “The team can skip or add phases for a particular product by noting in the team meeting action items list what is being done and why!”

Once the phases have been quantified and named, the next step is to prepare a chart to define numerous associated “issues”. Let’s take a generic company that normally needs three phases and they decided to call them Development, Pilot and Production. The chart would address issues by phase: 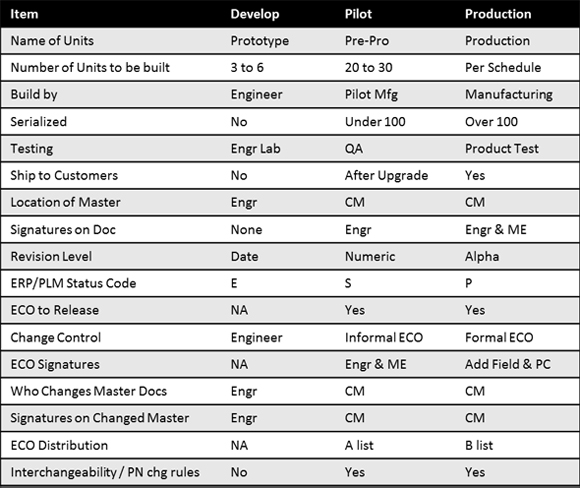 Add to and tailor the chart for your enterprise. Notice that there are no “ifs”, “ands” or “buts” in the chart. Each line item or “issue” needs to be carefully analyzed in terms of minimizing control while also minimizing risks. The chart needs to be placed into a standard and published. An associated policy statement should be prepared to answer a number of questions about the release process which may still be unanswered. Example: Can assembly documents be released to Pilot or Production before all its parts have been released? (answer; “no” according to this writer)

Keep in mind that the entire product / all new documentation does not need to progress through the phases in a “bunch” – don’t wait for release of a product until all new documents are ready. The release can and should take place a document or a small group of documents at a time. Manufacturing needs the release of parts in lead time to build. Engineering should release parts (documents) in their lead time sequence – 30 week and longer items first, then 25 to 30, etc. Recognition of this simple concept causes many good things to happen, not the least of which is a step function improvement in release time. Of course, one of the CM responsibilities is to keep the document coding “in sinc” with the ERP/PLM coding.

This chart and the associated standard(s) are absolutely essential in clarifying the release process. Without it, a certain amount of chaos in inevitable. With this chart, cross functional teams and associated standards you can attain fast, accurate and well understood release of new product. Try it, you’ll like it.