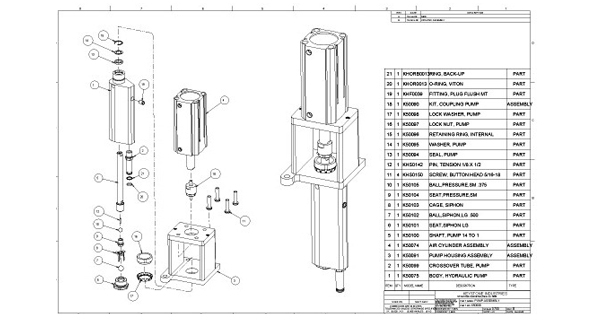 An exception would be wherein the company has one software system which feeds the parts list to the drawing as well as to other data processing systems. In this case, the existence of one data entry is the desired result. Unless your systems are automatically connected, the conclusion should normally be to detach the parts list and not to develop a separate one for the pictorial.

It is often stated that the production people need the parts list on the face of the pictorial drawing. This is usually said in companies who do not have an Industrial Engineer responsible for writing assembly processes – a much better tool for production than engineering pictorials.

In best industry practices, the part number of both assembly pictorial and parts list documents is identical. The find number allows easy cross-reference between the two documents. The revision level of both documents is maintained identically. Keep them that way to avoid confusion, even though all changes do not affect both documents. This avoids requiring customers to look-up the correct rev level of the matching “set” – all customers, forever.

Some companies have chosen to make the two documents different item numbers and to cross reference by listing the pictorial number on the parts list. Although less desirable, this is a workable scheme. It allows CM to only change the affected document and to allow their revision levels to be different. This scheme favors the CM department, however, not the customers of the documentation. Better from the customers’ viewpoint to spend the extra CM effort to make them the same part number and keep them at the same revision level.